Last year, Raw Hero, Dawson Reynier made a great video.  He said that Kayaking is his church. He spoke about the people and the places that keep him kayaking. It was a great reminder to celebrate the unique friendships that are forged when you do crazy things with crazy people in crazy places.

In rock climbing, it’s easy to chase grades and set ambitious goals. Those goals are important, they can push you to achieve things you never thought possible. If you work at it, the rewards can be amazing.  But rewards can also come if you put those ambitions aside for a moment and simply enjoy being in great places with great people.

One of my most enjoyable climbing days was spent with the folks sitting around this fire at Mount Arapiles.

One member of our group was flicking through the guidebook.  They found this picture and passed it around the circle. 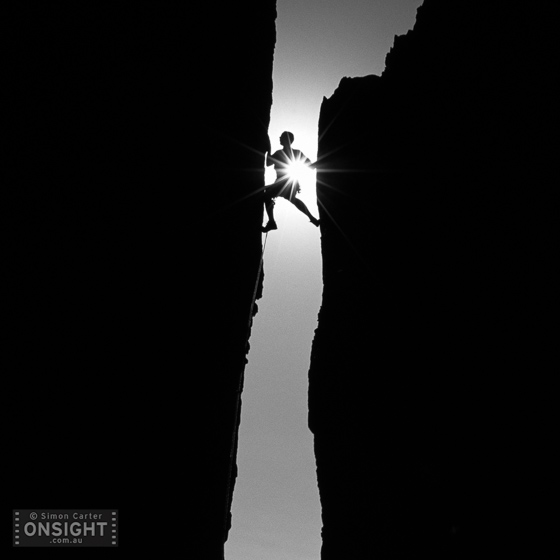 We wondered whether we could recreate the same silhouette.  We wondered if we could squeeze two climbers into our photo.

The night went on. The collective campfire mind began to wrestle with the logistics involved. Plans were hatched.  Smiles got wider. Then the campfire burned itself out.

The next day, we ventured up the route as a group. Laughter echoed out of the chimney all morning. Hundreds of metres of rope and a few racks of gear were dragged to the top of the chimney at less than record speed.

We built a series of elaborate anchors at the summit.  We double checked and tripled checked our systems to make sure everyone would be safe.

Soon, six bodies were lowered into position.  I scrambled down to a comfortable ledge and switched my camera on.

My view from the ledge looked something like this:

This is not the hardest route we’d ever climbed. It’s not the most epic adventure we’d ever had. The photos that we took are not nearly as slick at the one in the guidebook.

Even so, this day really stands out in my memory. This adventure was small, but it was shared, and that’s what made it great.

I hope that 2017 brings you all kinds of adventures, big and small. I hope you achieve the audacious goals you set for yourself.  But I also hope you also find some time to hang out with your mates somewhere beautiful and notice just how awesome that can be.

written for RAW by